MINISTRY's AL JOURGENSEN On Sexual Harassment Claims: 'It's Well Overdue That This Has Happened'

Adopt The Arts — a 501(c)(3) non-profit funding arts programs in public elementary schools — was founded by musician Sorum and activist Abby Berman and works to preserve arts programs in U.S. public schools. To raise awareness, Adopt The Arts honors individuals who’ve had a long-lasting impact on music culture and who inspire young musicians to follow in their footsteps. Lynch was the first celebrity to lend her support to Adopt The Arts and is on the board of directors; the advisory board also includes Slash, John Stamos, Billy Bob Thorton, Steve Stevens, Juliette Lewis, Shepard Fairey, Adrian Young and Gina Gershon.

According to Los Angeles Unified School District (LAUSD), 50 percent of elementary school children in the district are not receiving arts education of any kind. As in many school districts around the country, LAUSD has been slowly eroding its commitment to arts education, reducing the budget incrementally. The LAUSD district also estimates that 80 percent of its student body is living at or below the poverty line, which means the vast majority of these elementary school children will not have access to the arts outside of school.

“Adopt The Arts was born out of the frustration for my own children losing education in the arts,” explains Berman. “When the system is failing, we have to take action. With influential people like my co-founder Matt Sorum adopting schools, we can preserve this valuable component to childhood development, which is also known to boost test scores. Because federal and state funding is falling short, the responsibility is upon us as concerned parents and citizens to ensure we’ re raising a new generation of healthy and well-rounded individuals.”

Sorum adds: “We’re starting in our own backyard here in Los Angeles, and we’ll continue to adopt schools across the nation. We believe that art is a universal and necessary language that unites us all, regardless of our backgrounds.”

Tickets to the event are now on sale with prices ranging from $100-$500 each.

For more information and to purchase tickets, go to this location. 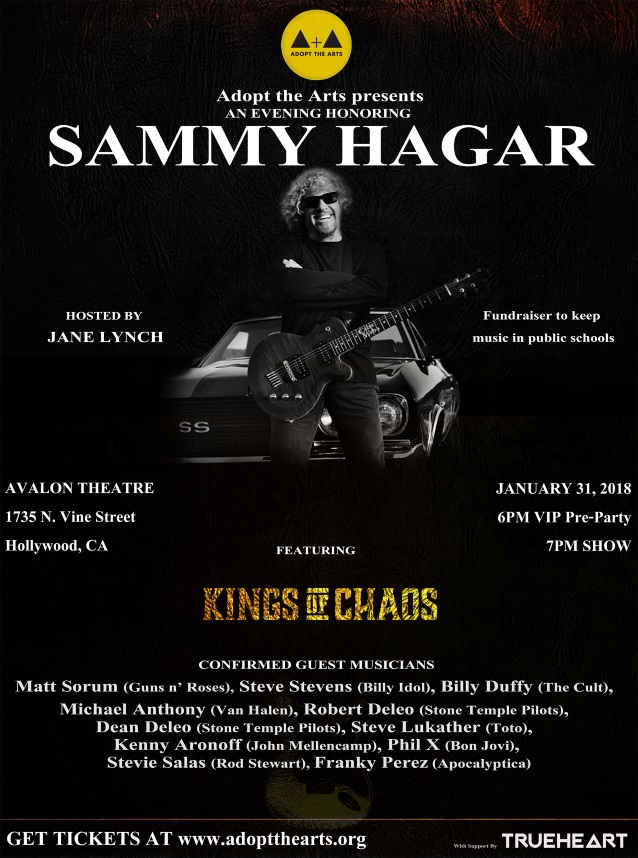