“Metal Magdalene With Jet” show on Metal Messiah Radio recently conducted an interview with guitarist Mark Briody of veteran Colorado metallers JAG PANZER. You can listen to the entire chat below. A few excerpts follow (transcribed by BLABBERMOUTH.NET).

On his memories of JAG PANZER during the early ’80s:

Mark: “The first show we did, we had to beg to get the gig because clubs here didn’t allow original music. We started, we would do cover tunes, then we would play original music, an original song. Harry [Conklin] would say ‘This song is a B-side, import of BLACK SABBATH‘s ‘Paranoid’ single.’ After every gig, we’d always have some drunk guy coming up to us ‘I got that single! You guys sound great on it.’ Our first all-original gig, we had to beg for it. Clubs here just didn’t book original gigs, so we did it and people started dancing during the first song and they quickly quit and then left. For a while, we were playing to an empty room. Eventually people started coming in. It was actually really weird. By the time the set was nearing the end, we had a full house. We were kind of welcomed to all of the clubs here in Colorado then, which was really cool. We sort of blazed a trail for original metal here.”

On having former MEGADETH lead guitarist Chris Broderick in JAG PANZER from 1997 to 2008:

Mark: “He was friends of a mutual friend of ours up in Denver. Chris was living about an hour away. I actually met Chris a few times before. I knew he played guitar, but I had no idea he played guitar like that. The guy is an amazing guitar player and a cool guy. We hit it off right away. I think we did five or six albums with Chris. It was a good time. We were happy for him when he got the MEGADETH gig. That was a huge move for him. There was no animosity or anything. We consider him a friend before a band member. We celebrate the success of a friend.”

Mark: “We wanted, of course, a metal record, but we wanted a lot of variety on it. The records we grew up with as really young kids, like the LED ZEPPELIN records and some of the early BLACK SABBATH, had a lot of variety on it. We were talking that we weren’t hearing that in a lot of modern metal. We wanted to do some variety on this, so we made sure that the music was in a few different time signatures, key signatures, that every song sort of had its own character. That’s what we were going for, whether we succeeded or not, that’s up to the individual listener.”

On the lyrical concepts behind “The Deviant Chord”:

Mark: “Lots of different things; it’s not a concept [album]. Harry likes to write a lot about the brotherhood of heavy metal fans. We’ll go to the shows all around the world and everybody is really cool. It’s just a really cool environment how you play a huge festival in Europe and you’ll have twenty-thousand people just absolutely in synch, just listening to a band, which is really, really cool. People are cool at the clubs afterwards. It’s just a cool scene. He finds a lot of inspiration in that.”

On the cover artwork for “The Deviant Chord”:

Mark: “The cover art, I’ve always wanted to do a mad scientist theme for years. We grew up here in Colorado Springs and that’s where [inventor] Nikola Tesla had his famous laboratory. His laboratory is probably five miles where I’m at now. They called him ‘The Mad Scientist’ back then. He was here in the late 1800s, we just gotten a power grid in town and he knocked it out for the whole town, doing these crazy lightning experiments. So they called him ‘The Mad Scientist’, so we sort of grew up with those stories. I’ve always wanted to do mad scientist-themed graphics. I wanted pictures of the band’s heads in jars, the whole thing. But, finding the right artist to do it is what’s taken a while. I spent a good year and-a-half looking at artists. I went to Comic-Con and probably talked to twenty artists. I probably contacted another ten or twenty more that I saw online until we found Dusan [Markovic]. He’s a Serbian artist. His work is just great. He and I talked and we were really in synch for what I wanted to see for an album cover. So we hired him and I think what he delivered is fantastic. It’s creepy and cool and it’s got that classic horror angle to it that I’ve always loved for metal album covers.”

“The Deviant Chord” was released on September 29 via SPV/Steamhammer and is available as a CD digipak (including poster) and double LP colored version as well as for download and streaming. 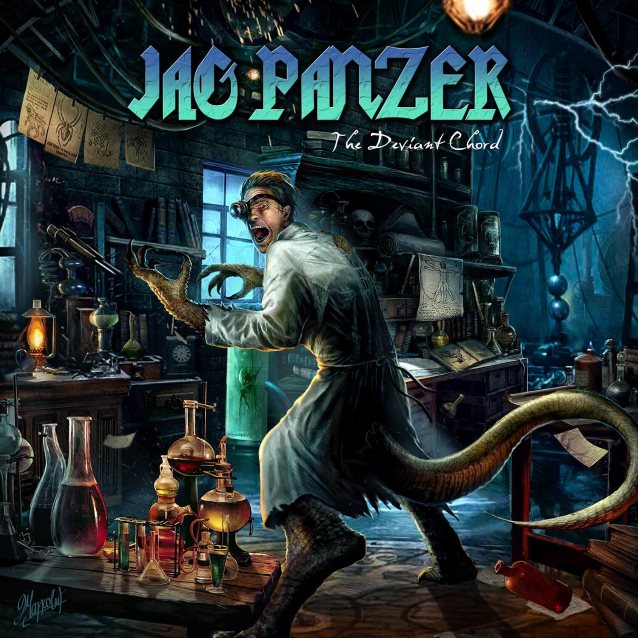