VUUR, the new band featuring renowned Dutch vocalist Anneke Van Giersbergen, will embark on a European headlining tour in February 2018. The group will be supporting its debut album, “In This Moment We Are Free – Cities”, which was released on October 20 via InsideOut Music. The disc was produced by Joost Van Den Broek, who was also involved in the writing process. Other co-writing partners are Mark Holcomb (PERIPHERY), Esa Holopainen (AMORPHIS), Daniel Cardoso (ANATHEMA), and both of VUUR‘s guitar players wrote a song as well. Anneke co-wrote “Freedom – Rio” with Holcomb and Joost Van Den Broek.

Anneke comments: “We are currently on tour with EPICA and we are very grateful they provide the opportunity to play large venues straight after the release of our debut album, but we’re equally excited to return to Europe in February 2018 to play these headline shows! The setlist will include most tracks form the VUUR album and my favorites from my heavy back catalog.”

Regarding “In This Moment We Are Free – Cities”, Anneke said: “The cover is designed by Black & Finch, with whom I’ve previously worked on the ‘Verloren Verleden’ release.

“The lyrical themes of this album revolve around cities and freedom. Exposure to big cities can be overwhelming and you can feel engulfed by everything around you. At the same time it’s easy to be a stranger in a big city and for me that brings out a feeling of freedom as well. This past year I’ve thought a lot about the virtues of rural versus urban life, since me and my family are moving back to the city. It’s very exciting, but at the same time I know that sense of urban solitude from past experiences. The cover artwork represents this duality.”

In early 2016, Anneke decided for the sake of clarity to narrow her musical focus, choosing to go in a folk acoustic direction as a solo artist and in a heavy progressive metal direction as a band vocalist. The name VUUR — translated from Dutch as “fire”, which can also be interpreted to mean “passion” or “drive” — was chosen as a moniker to represent Anneke‘s metal side, with the idea that when fans buy a ticket with the VUUR name on it they will be getting her heavy progressive music, while an Anneke Van Giersbergen show will be entirely different.

“It’s like I’m searching for contradictions,” Anneke said of splitting her focus in two. “I want the heavy to be really heavy, and the soft acoustic stuff that I can do can be almost silent and inward. I’m trying to find those outer limits. I’m still writing and collaborating with different people, so VUUR‘s style is still kind of different from THE GATHERING and THE GENTLE STORM. You could say VUUR‘s music has the melancholy of THE GATHERING and lots of elements from THE GENTLE STORM, but it’s a bit darker with fewer folk elements. It’s still melodic and warm, but heavy.”

The band shares some members with THE GENTLE STORM live band, and you can find the full lineup below:

Anneke commented: “The band has a different name, because the music will be slightly different from THE GENTLE STORM, but most band members are still involved and the music will be heavy too, so in that perspective not a lot will change, especially in the live situation. I think people will really embrace VUUR as a live band because there are nothing but stars in this band. [Laughs] They’re some of the best heavy metal players in Holland so I didn’t want to let them go.”

VUUR began playing live this summer. The band also recently announced they will team up with SCAR SYMMETRY for a short co-headline tour in December. Opening act for these exclusive shows will be MY PROPANE. 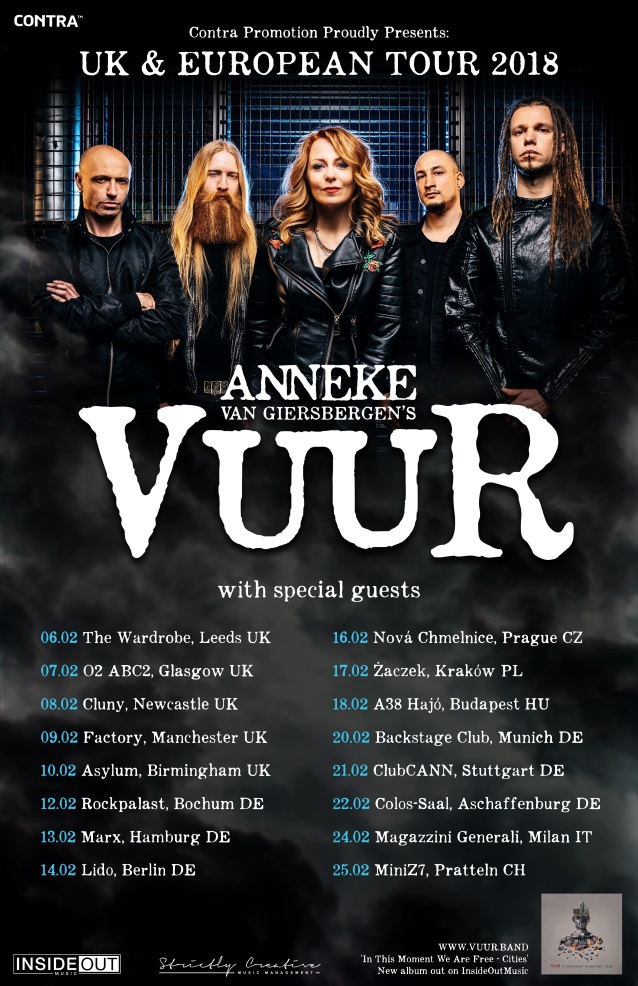