Fan-filmed video footage of STONE SOUR‘s entire November 10 performance at Stadium in Moscow, Russia can be seen below.

STONE SOUR is continuing to tour in support of its latest album, “Hydrograd”, which was released on June 30 via Roadrunner Records. The disc was recorded at Sphere Studios in North Hollywood, California with producer Jay Ruston, who has previously worked with ANTHRAX and STEEL PANTHER. The band tracked the album live in the studio, cutting a total of eighteen songs from which fifteen made the CD.

STONE SOUR singer Corey Taylor told iHeartRadio about “Hydrograd”: “It is kind of a departure, but not really. To me, it’s more of an evolution. It’s taking everything that we’ve done on the last few albums, and really honing it down and turning that diversity into more cohesion and really finding the strength in the song to be able to express ourselves through all of these different genres that we’ve always dipped our toes in, whether it’s hard rock, or heavy, or metal, or just rock and roll, or straight up punk, or even in one of the cases a bit of California country.”

He added: “I don’t think it’s so much a departure, as it is just becoming more of what STONE SOUR really means.”

Taylor went on to call “Hydrograd” “the best stuff that [STONE SOUR] has ever written.” He explained: “I think the songwriting is stronger, I think the energy in the recording is better, and I think that comes down to the way we recorded it, which was live in the room. No click, no grid, no beat detective, no Auto-Tune, no fake guitar sounds, everything was real. That really allowed the songs to become very alive and very exciting. I also think that it’s some of our strongest performances. Obviously, it’s our first album with Christian [Martucci, guitar] and with Johny [Chow, bass], and those guys shine like crazy. And with Roy [Mayorga, drums], this is really his coming-out party. People are really going to start looking at him very differently. [He’s] just one of the best drummers on the planet. Josh [Rand, guitar] [can be heard] really experimenting, doing all these crazy things. It’s some of the best music that we’ve ever created as a band, and I hope that people listen to my singing and my writing and just can see where I’m at from a personal standpoint and from a professional standpoint. I feel like it’s my best work that I’ve done in a long time and I don’t really care if people don’t hear it, say it’s heavy or whatnot. It’s just really good straight-up rock and roll, and it’s amazing.”

Regarding the “Hydrograd” title, Taylor told told Detroit radio station WRIF that he was running through an “antiquated” airport in Eastern Europe a few years ago where the gate info was “on those old-school ’80s block-letter, number, digital horrible Timex watch kind of readers” and scrolling between different languages. As he ran past, Taylor thought he saw the word “Hydrograd.”

Taylor said: “So my brain is trying to do geometry while also at a sprint because I don’t wanna miss my plane. I pass one and I look up and I could have swore it said ‘Hydrograd.’ And I kept running for a second and I was, like, ‘Hydrograd? Where the hell is Hydrograd? What?'”

Taylor eventually realized that the word wasn’t “Hydrograd,” recalling, “It didn’t even start with an ‘H.’ It wasn’t even close.” But he still remembered the word, saying, “It’s a cool name. It was what I saw but didn’t really see.” 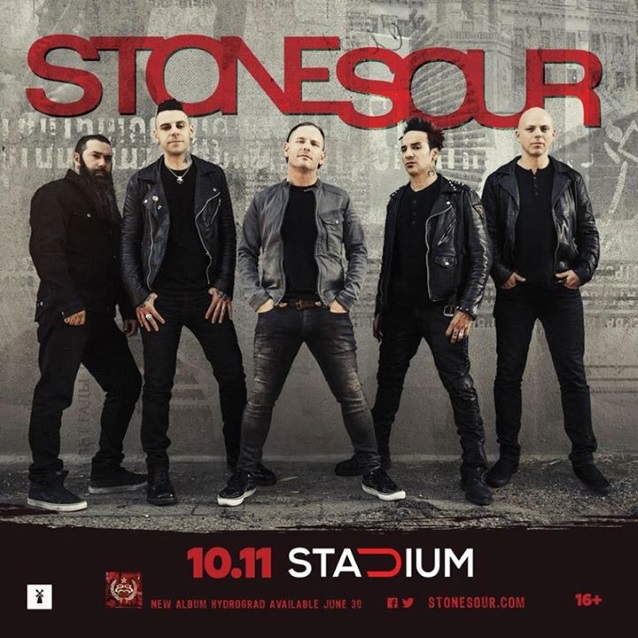