VAN HALEN: 'Breaking The Band" Documentary To Premiere This Sunday

MACHINE HEAD's ROBB FLYNN On 'Catharsis' Album: 'It's A Game Changer For Us'

Swedish metal outfit AMARANTHE has released a remix of its song “Maximize”. The opening track of the band’s “Maximalism” album was remixed by up-and-coming Finnish electronic music producer/DJ Bliniks, who commented: “For me, heavy metal has been a huge savior in inspiration for the last few years, and nowadays I have a massive urge to combine the elements of melodic metal with the heavier side of electronic music.

“AMARANTHE‘s ‘Maximize’ was an amazing experience to remix, because the original was so melodic and uplifting that I already got an amazing idea for a remix after hearing for the first time.

“Dubstep is one of my most common genres that I produce and the reason why I decided to go right into the remix with dubstep is because some of the modern dubstep is pretty much inspired by heavy metal, but for some reason that has been somewhat forgotten. This remix also includes some bigroom house and trap elements at the end of the remix, so it’s the most varied remix that I have produced to this day.”

Added AMARANTHE guitarist Olof Mörck: “Electronic soundscapes have always been a vital part of AMARANTHE‘s sound, and yet we have tried very little in the realm of collaborations and remixes. ‘Maximize’ was just a perfect track for such an experiment, and from the very first time we heard Bliniks‘s rendition of the song, we were blown away. For a remix, it really retains the heaviness of the track, but from a brand new and fresh perspective! With an array of cutting edge sounds and electronic vistas, Bliniks have produced a remix that could both appeal to headbanger and EDM fan alike — and that is saying a lot!”

AMARANTHE will embark on a co-headlining European tour with ELUVEITIE in October/November. THE CHARM THE FURY will guest on all shows.

Having previously used Chris Adam Hedman Sörbye from the band SMASH INTO PIECES as a stand-in for Jake on some of the shows in 2016 and earlier this year, AMARANTHE recruited Molin for three Swedish concerts in March and he has been part of the group’s live appearances ever since. 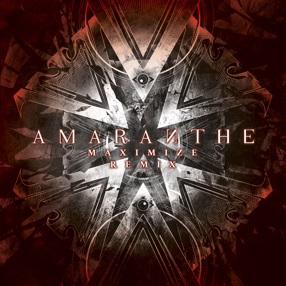