JIMMY PAGE On His Next Solo Release: It Will Be 'Everything I Can Muster Up'

A new GALACTIC COWBOYS song “Zombies”, taken from “Long Way Back To The Moon”, can be streamed below.

GALACTIC COWBOYS has always been a musical enigma. Hailing from Houston, Texas, the band combined melodic thrash, progressive metal, and BEATLES-esque harmonies into a genre of its own creation. Blending these considerable musical chops with a quirky sense of humor, the band quickly distinguished itself from anyone else in the world, garnering fans amongst some of music’s biggest stars. Their first time around, though, they were the right band at exactly the wrong time. On this outing, they shoot for the moon again, and celebrate the journey back.

The COWBOYS‘ most notable fanbase became other musicians—an exclusive club that included other 1990s musical misanthropes such as JELLYFISH, KING’S X and Kevin Gilbert. Reflecting both the musicality and diversity of the band, GALACTIC COWBOYS toured with two hard rock/metal legends, ANTHRAX and DREAM THEATER.

Said former DREAM THEATER drummer Mike Portnoy: “The GALACTIC COWBOYS were (and still are) one of my favorite bands to emerge from the ’90s. Great songwriting, killer players and euphoric harmonies. They were always criminally underrated and overlooked, which led to their premature demise in 2000. My last seventeen years have had a hole in my musical palate without them and I couldn’t be happier at the announcement of their return! Welcome back boys… I missed you!”

The eleven new tracks (and two bonus tracks) included on “Long Way Back To The Moon” harken back to the COWBOYS‘ iconic songs, but are infused with a contemporary hard rock sound. In the tradition of ALAN PARSONS PROJECT, Steven Wilson and PERIPHERY, the album is completely organic: engineered, produced, mixed, and mastered by the band — even all the artwork. One trapping of contemporary production set aside by the band was an over-reliance on studio trickery — no Pro Tools, drum triggers or even vocal tuning. Just real music by real musicians.

The album’s sound is alternately heavy, whimsical, charging, and crunching, combining inescapable atmosphere with the drive of a band on a mission. Old fans will feel at home, but hard rock fans who have never heard GALACTIC COWBOYS before will also be instantly hooked. As with all GALACTIC COWBOYS albums, the songs are emotional in topic, and often including a large dose of ironic humor. Each song is performed, sung, and written with intense passion.

Said Colvin: “It was an absolute pleasure getting back together with the guys to record this album. I think we’ve all grown as musicians and as people since we first got together in ’89, and I think our fans will really love this new stuff.”

The song “Zombies” is a tongue-in-cheek study on finding love on the last day of human existence, blended with social commentary regarding modern society’s obsession with its electronic screens. Timely topics continue with “Next Joke”: from kids’ sports in which everyone gets a trophy to Disney telling kids to wish upon a star and all their dreams will come true, our unrealistic expectations have set us all up for failure: the joke is on us. “Internal Masquerade”, the album’s first single, examines the turmoil endemic to the human experience and the difficulties in keeping self-generated darkness at bay, themes revisited in darker “Blood In My Eyes”.

A special treat for fans both old and new is “In The Clouds”, the album’s leadoff track and also the first GALACTIC COWBOYS song ever written. Penned in 1989 by Doss and Colvin after the demise of their previous outfit, THE AWFUL TRUTH, the song explores leaving the banal confines of this world behind and ascending to a higher plane of existence. It’s also the song Huggins sang to earn his spot in the band!

Said Sonnier: “We can’t wait for everyone to hear this, and it’s great to be back. Back from the Ranch on Mars and onward to the moon.” 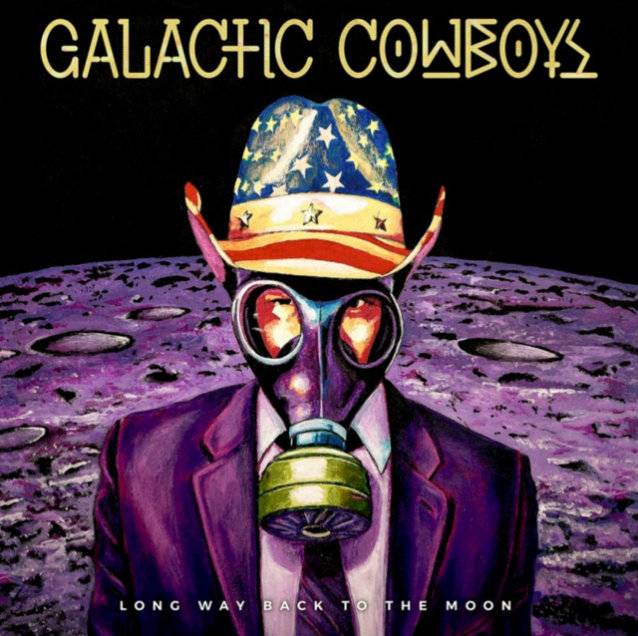