SLIPKNOT percussionist M. Shawn Crahan will launch a solo exhibition of his art, “His Whores”, on November 2 at Lethal Amounts in Los Angeles, California.

Crahan, a.k.a. “Clown“, is the creative force behind SLIPKNOT, one of rock music’s most unflinchingly creative, uncompromising, and successful bands. To the band’s millions of fans around the globe, SLIPKNOT aren’t just a group, they’re a culture — a way of life. For SLIPKNOT, Crahan oversees and directs everything from the album and video artwork, stage set, uniforms, and directs the band’s videos and films. Outside of SLIPKNOT, Crahan is no less creative. For him, the drive to create art is what has lead to SLIPKNOT, and not the other way around.

Said Crahan about the works in “His Whores”: “These days I’m obsessed with finding what is hiding in plain sight within my art. Seems like I mend the wound of saturation. I void the obvious and flush out the shy that lurks in the wetness. I take the thrown away realities and save them from themselves by displaying what is really there; what has to be there. It’s always been mine to share and grasp ahold of. It’s what drives my curiosity. What’s hiding? Or what’s been waiting to be found.

“‘His Whores’ is a collection of left-behind thoughts that have taken me a lifetime to try to understand. I chased these ideas and demons, until they became whatever they are now.”

“His Whores” will be open to the public starting on Thursday, November 2 at 9 p.m.

Lethal Amounts, the creation of Danny Fuentes, focuses on subversive and counter culture themes throughout history, addressing the social and artistic value of underground movements while highlighting taboo topics. Lethal Amounts showcases the extremes of those individuals who have moved culture forward and live on the edge of and outside of societal norms. Rock ‘n’ roll of the past that has crossed over into pop culture fanaticism, street culture influences and cult hero worship.

SLIPKNOT recently premiered “Day Of The Gusano”, a documentary about the band’s first-ever visit to Mexico City, focusing on the importance of its fan base of “maggots” and featuring a catalog of live performances from the concert. 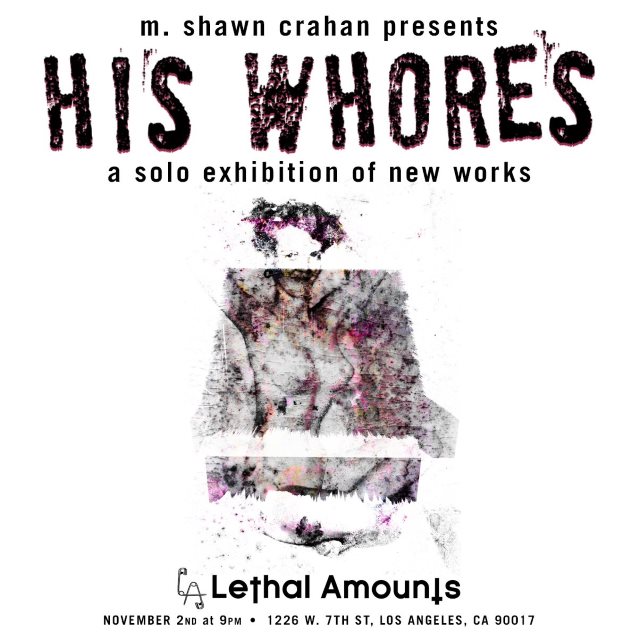