Capital Chaos TV has uploaded video footage of EXODUS‘s October 6 performance at the Ace Of Spades in Sacramento, California. Check it out below.

Although it was originally reported that EXODUS would go into the studio in October to begin recording the new effort, it now appears that fans will have to wait a bit longer to hear new music from the legendary San Francisco Bay Area thrash metal group. “[We’re] probably gonna have to put it off,” drummer Tom Hunting admitted to Metal Wani. “This [‘Battle Of The Bays’ North American] tour [with OBITUARY] kind of set back the writing process a little bit. But we’re chugging along. We’re not gonna rush anything. We just want it to be good. We don’t care when it’s done, just that it’s good.”

Tom said that he loves the process of making new albums. “It’s like building the perfect sandwich,” he explained. “And the drums are the bread that holds it together. The riffs are the meat.”

Asked if the writing process has changed at all now that singer Steve “Zetro” Souza is back in the band and is available to contribute, Hunting said: “Not too much. It usually starts… We’ve been doing it a while now, but it usually starts with a riff, and then guitars and drums jam together and everything else comes later. So that’s kind of how we layer it in terms of creating the stuff.

“Some songs are crazy; they take forever,” he continued. “Like, I’ll be working with Lee [Altus, guitar] one day and we can’t even get fifty-eight seconds worth of shit. And then the next day Gary [Holt, guitar] comes over and we jam and we have the makings of a whole song in, like, five minutes.”

“Blood In Blood Out” was notable for featuring a guest appearance by former EXODUS guitarist Kirk Hammett, who left the band in 1983 to join METALLICA. Asked if the upcoming EXODUS disc could include another collaboration with Hammett, Hunting said: “We’ll bring Kirk back, if he wants to come in and do a solo, for sure. And there might be a Rick Hunolt [former EXODUS guitarist] sighting on the new record too; you never know.

“At this point, we feel like it’s good to celebrate the history of the band and all the important people that have been in the band along the way,” Tom explained.

“Blood In Blood Out” was EXODUS‘s first album since the departure of the group’s lead singer of nine years, Rob Dukes, and the return of Souza, who previously fronted EXODUS from 1986 to 1993 and from 2002 to 2004.

Holt spoke in a recent interview about the musical direction of EXODUS‘s next disc. He said: “Of the stuff I’ve written so far, I think the songs are shorter, but I think they’re also at the same time more progressive than the last album. It’s a little outside the box. It’s really super crushing, but I think people will be surprised.”

He added: “It’s an EXODUS album, but as of now, the stuff Tom and I have been putting together is a bit different. It’s got those subtle changes that make for a departure, but it will still stay true to the core of the band’s sound.” 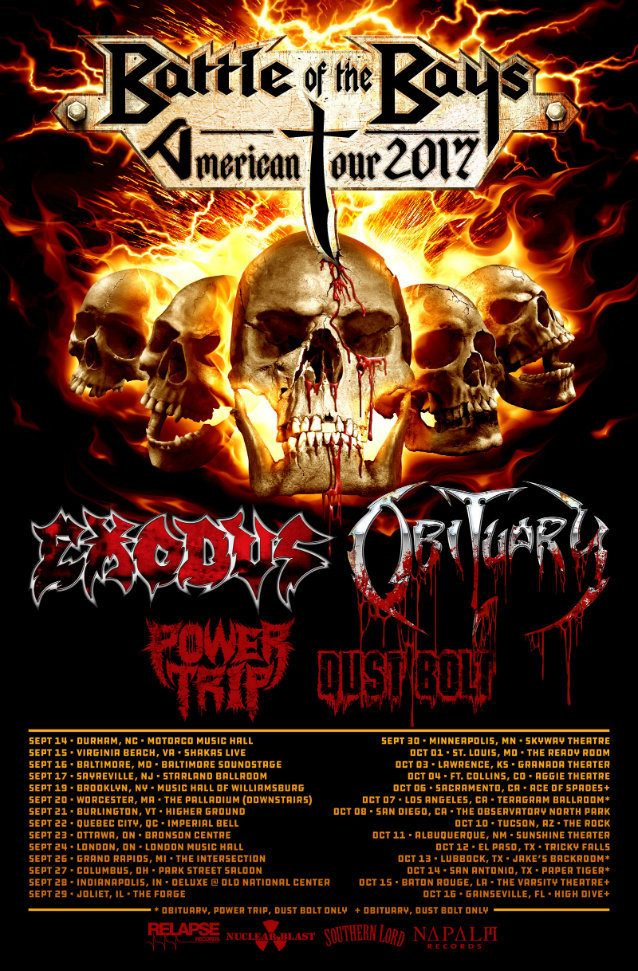