FOZZY's CHRIS JERICHO: We Realized The Only Chance We Had To Make It To The Next Level Was By Being Ourselves

Grinding Around The World: France

San Francisco Bay Area metallers MACHINE HEAD have announced a European tour in support of their forthcoming ninth studio album, “Catharsis”, which is set for release in early 2018 via Nuclear Blast.

MACHINE HEAD vocalist/guitarist Robb Flynn states: “It’s been far too long since we’ve demolished venues in Europe and the U.K.! We have had an awesome and productive break writing our new album. ‘Catharsis’, but now it’s time for MACHINE HEAD to go melt some faces!! The reaction to our last ‘Evening With’ tours in Europe and U.K. was nothing short of incredible, so once again these dates will be ‘Evening With’ shows and will see us performing two and a half to three hours every night, with no opening bands.”

He continues: “We loved performing as an ‘Evening With’ for the European and U.K. Head Cases and you guys loved it as well. The freedom to do whatever the fuck we want, for as long as we want every night was liberating. Jamming ‘Desire To Fire’ live for the first time in aeons at the Ten Ton Hammersmith show in London was epic as fuck! This is not what everyone else is doing, and frankly, there are not a lot of bands who could even pull it off, but MACHINE HEAD can pull it off, and we are excited as fuck to do it again. We are carving our own path here, playing by our own rules, and as an artist, it’s the best feeling in the world! No festivals, period! No supporting some stupid DJ! The HEAD will only be ‘Headlining’, so come on down and rage!!”

MACHINE HEAD‘s latest track, “Is There Anybody Out There?”, cracked the Top 40 on the Active Rock chart in the United States in August 2016. It marked the first time any Nuclear Blast artist has entered what is widely considered to be the “official rock chart” for the United States, and only the the third time the band had charted in the Top 40 in their illustrious career.

MACHINE HEAD last year wrapped up the tour cycle for its first Nuclear Blast Entertainment album, “Bloodstone & Diamonds”, where the band toured for twenty months and performed a whopping two hundred and eighty-three concerts on five different continents around the world. Around two hundred and fifty of those shows were performed as “An Evening With MACHINE HEAD,” with no support bands and performances often lasting two and a half to three hours. Three tours of the United States, three tours of Europe, (including multiple dates in Russia and Greece), shows in Mexico and South America, a completely sold-out run of nine Australian / New Zealand shows, sold-out dates in Japan,and their first-ever plays in Taiwan and Thailand, and all without any festival performances which the band publicly announced they would stop performing at in 2014. 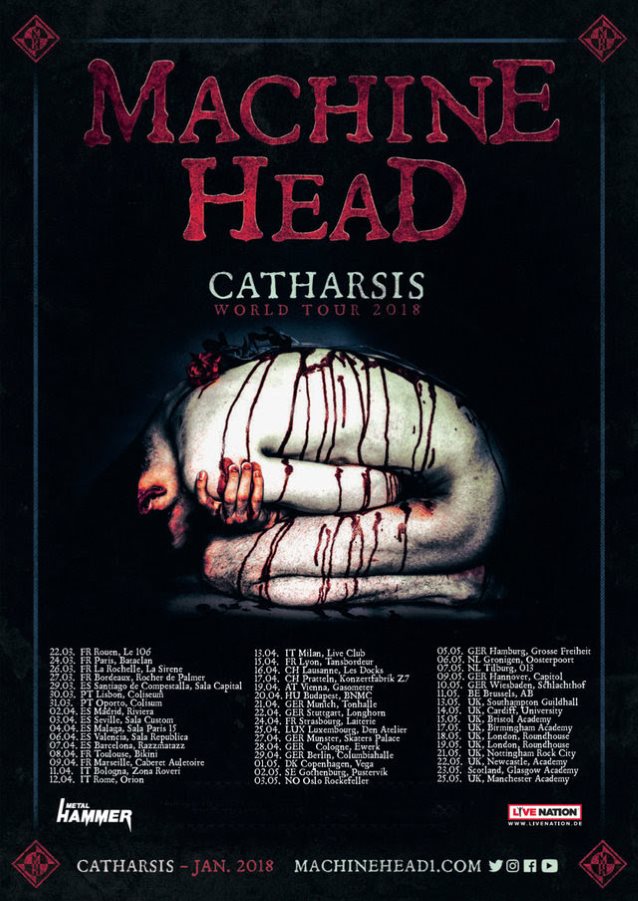