Chester Bennington‘s former bandmates from GREY DAZE and DEAD BY SUNRISE played a three-song acoustic set on Saturday, September 2 at Saxe Theater in Planet Hollywood in Las Vegas during a memorial event for the late LINKIN PARK singer, who passed away in July.

Amir Derakh, Mace Beyers and Ryan Shuck performed the songs “Morning After” (DEAD BY SUNRISE), “The Down Syndrome” (GREY DAZE) and “Let Down” (DEAD BY SUNRISE) at the complimentary memorial fundraising event, which was organized by Club Tattoo and hosted by KYFI 550 radio personality Gregg Paul.

Video footage of the performance can be seen below. Check out photos at Las Vegas Review-Journal.

Bennington and his partners opened the first Club Tattoo in Phoenix more than two decades years ago and expanded with at least three more in Arizona. They also opened a Club Tattoo location in Planet Hollywood’s Miracle Mile in Las Vegas.

Bennington was found dead in his Los Angeles-area home on July 20. The singer committed suicide by hanging himself.

Bennington‘s private funeral service took place on July 29 near his home in Palos Verdes, California. It was attended by five hundred guests, including members of all three bands he sang in: LINKIN PARK, STONE TEMPLE PILOTS and DEAD BY SUNRISE.

LINKIN PARK canceled all plans for the immediate future, including a North American tour. 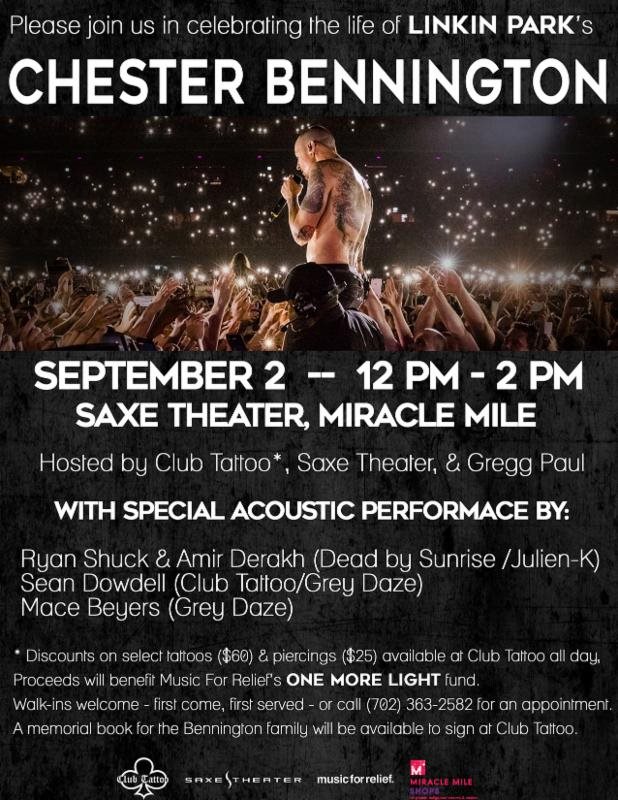